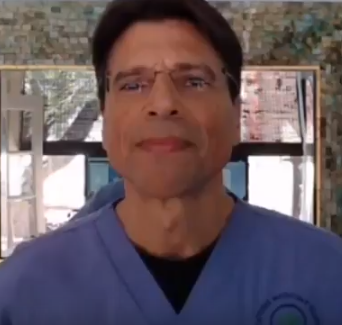 Hi. My name is Dr. Tom Rofrano from the Natural Medicine Clinic in Palm Beach Gardens, Florida and today, I’m going to talk to you about why gluten-free diets don’t work.

Many Patients Experience the Symptoms

Today, I’m going to talk to you about three reasons you feel terrible even if your thyroid tests are normal. For three decades, I’ve practiced functional medicine, chiropractic, and nutrition in Palm Beach Gardens, Florida. One of the more common things I see in patients is thyroid conditions, hypothyroidism typically, which is most commonly caused by Hashimoto’s. And one of the things patients repeatedly come in and say is that they had a thyroid test done and their doctor said everything was fine.

Let’s review some of the symptoms of thyroid dysfunction; which is very common in the United States as over 20 million Americans have it. (That’s more than 12% of the population). Some of the common brain symptoms of thyroid conditions include poor memory and concentration, brain fog, depression, anxiety, and moodiness. Then you have the full-body symptoms like fatigue, exhaustion, difficulty getting up in the morning, aches and pains. Constipation is a very common symptom of low thyroid function, as well as hair loss, difficulty losing weight, infertility, and miscarriages.

And then there’s nerve compression. Carpal tunnel syndrome is a symptom of hypothyroidism which is something that I dealt with some years ago; to the point I was unable to treat patients for a while.

All told, thyroid issues can present many, many different symptoms. If it goes untreated, low thyroid can even lead to heart disease and heart failure. Every square inch of your body, every gland, every function of your body is affected by low thyroid function: Cold hands and feet, dry skin… just on and on.

The number one reason why you can still feel terrible after your thyroid tests come back normal is that your doctor ordered the wrong test. Typically, doctors will order a TSH and possibly a T4. TSH (Thyroid Stimulating Hormone) is actually a pituitary hormone, not a thyroid hormone, but they use that to tell how your thyroids look. But in actuality, it just presents a very incomplete picture. You can have a completely normal TSH and T4 and still have a thyroid issue.

When patients come to me, I order a full round of the thyroid test. This includes TSH, Free T4, Free T3, Thyroglobulin antibodies, and TPO antibodies. That the only definitive way to diagnose Hashimoto’s, which is an autoimmune condition that causes the immune system to go haywire and attack your thyroid. Those two antibodies are crucial for that, and I’ll often do a reverse T3 as well. So those six tests are crucial for determining what’s going on with your thyroid. If you’re not doing those, you can oftentimes miss the real issues.

Looking back at my own condition years ago, I had an elevated TSH, and for over 20 years doctors wanted me to go on centaury but I didn’t want to. I took some thyroid glandular and some other things and was okay. About 12 years ago, when I started developing more symptoms, including carpal tunnel syndrome, triple neuropathy, and almost everything I listed above.

I started looking further and I ran tests on myself and determined it was Hashimoto’s after running the antibody test. I probably had it all that time and was being untreated, that’s why getting the right tests is so important. Once you do, then there’s a way to treat it and get better. Even with my case, after finding out exactly what was going on, and as far as tests, I don’t suggest just doing thyroid. Just those six thyroid tests are not enough.

Patients need a complete health screen, with a female or male panel, to assess what else is going on. In my case, I had 12 deficiencies including vitamin D and magnesium. Those are the main ones but I also had digestive issues which in fairness may have been caused by the fact I had parasites, yeast overgrowth, and heavy metal toxicity.

If you have pathogens, toxins, and nutritional deficiencies; all those can affect your autoimmune condition thyroid. And then, we just took the steps to get all those cleared up including taking proper supplements and a diet which I now call the FreeDiet. This diet is free of the most common food allergens like gluten, grains, sugar, yeast, sweet corn, soy, dairy, legumes, GMOs, you know. After you eliminate a lot of the food reactions, you find certain supplements to replace deficiencies and focus on specific things to clean up like detoxing heavy metals.

A Second Reason to Feel Terrible with Normal Test Results

Another reason why you can still feel terrible even if your tests are normal is interpreting the test wrong. Even if your doctor orders these six tests, (you actually can get them to order these), they may often be interpreting them wrong. A lot of normal TSH might be .4 to .5 and they’re not optimal ranges, so ultimately you want to be like .3 or .25.

You can still have a lot of symptoms when your TSH is at .3, .35 and .4. A lot of doctors won’t treat thyroid issues if your TSH is less than 10, you know, even the American Thyroid Association guidelines don’t recommend treating the thyroid unless your TSH is over 10. That means a lot of people are walking around just feeling completely miserable and there’s no reason for that. You just have to interpret the tests properly and then the Free T3, Free T4 for instance, it’s best to be in the mid-range or above. If you’re at the very low end of the range but the doctor interprets that as fine, that’s actually another reason why you can still feel terrible.

About 14 years ago, my wife Dawn had issues and was suffering from infertility. We tried to get pregnant for six years without success. All the doctors and specialists she went to said everything was fine. Finally, she let me be her doctor. I ran a complete blood work including the complete thyroid test I just mentioned. And it looked fine, everything was in range, but her T3 was really below optimal, and T3 is the active form of the thyroid.

Again, infertility is a common symptom of low thyroid function. So we got her T3 balanced out with some glandular supplements and what I now call the soda-free diet along with our seven-step functional and free treatment plan. After the first month, she said, “See? It didn’t work.” But I assured her it takes a little time, and by the second or third month, she was pregnant. Yeah, it was great and if you check our YouTube channel, Dr. Tom Rofrano, there’s a separate video on how we did that. But anyway, interpreting the test properly is crucial to getting your thyroid fixed.

A Third Reason You Feel Terrible

And the number three reason you can still feel terrible after thyroid tests are normal is the wrong treatment. Even if your doctor does the first two things right, they’ll want to typically put you on synthroid or a generic synthetic chromosome. Synthroid is only T4, synthetic T4, and what I found and holistic doctors find, is that most of their patients invest in natural desiccated thyroid like Armour, WP Thyroid, and Nature-throid because it has natural T4 along with T3, T1 and T2, and other enzymes and cofactors. Typically, patients are much better on that as opposed to the synthetic T4.

Recently, I had a woman 62-year old woman come in who was just feeling terrible aches and pains, fatigue, exhaustion, bloating, and there’s high blood pressure. I mean, she was just feeling miserable, and she couldn’t lose weight no matter what she did. I did an evaluation, step one of our functional entry programs which included the proper blood testing, but with no analysis, and put her on the FreeDiet, our natural medicine formula, and a treatment plan Within four weeks, her blood pressure dropped 30 points to normal. Her cholesterol dropped 40 points to normal, but that didn’t mean it was not thyroid-related. Her vitamin D came up 50 points to normal, there’d been four weeks and her TSH was 8.3. Now, she was on natural desiccated thyroid already from a naturopath but her TSH was 8.3, even on medication.

With the program I put her on, I didn’t change her medication, yet her TSH came down to one point one. Her absorption was actually gut issues that cleared up with the FreeDiet and the supplement so she was able to absorb the medication a lot better. And besides that, in the first six weeks, she lost 12 pounds and she was thrilled, saying she felt the best she had in years.

That’s what can happen when you get those three things under control, order the right tests, interpret the data properly, and do the right treatment. It’s just an example of how, no matter what’s going on with you, you absolutely can get better if you discover the root cause and get the right treatment.