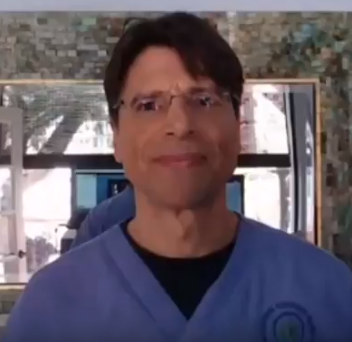 Hi, my name is Dr. Tom Rofrano from the Natural Medicine Clinic in Palm Beach Gardens, Florida. Today I’m going to talk to you about how to get to the underlying root cause of your autoimmune condition. In particular, I’m going to talk about ulcerative colitis, and in turn, once you find the root cause, how to then find solutions to help you get better.

I’ve been practicing for over thirty years in functional medicine and nutrition, and I’ve seen over one hundred thousand patient visits. Like many of our patients, we had a sixty-two-year-old man come in with typical symptoms we see a lot of: fatigue, depression, anxiety, insomnia, and digestive issues ranging from pain, bloating, gas, and diarrhea.

On top of that, he was obese and had a very hard time losing weight. He also had gout, so he had a lot of joint pain, and high blood pressure, too. He was just feeling completely miserable.

There are two approaches to any autoimmune condition, whether it’s thyroid, like we see so much of, digestive issues, or any health condition, really.

This patient had been dealing with his condition for over forty years, had gone to different doctors, and was diagnosed with ulcerative colitis, an inflammatory bowel disease that causes ulcerations, inflammation, bloody diarrhea, cramping, and pain.

When you choose medicine, the treatment is medicine, procedures, and surgery. In this case, he was treated with the steroid Prednisone, and biologic’s which have similar side effects to chemotherapy.

The patient’s side effects were so severe that he ended up hospitalized for three months, and he almost died. He got an infection in the hospital, which had him readmitted soon after he left.

After all of this, they decided on surgery, so they actually took out his colon.

The thing is, all of this didn’t fix anything. So, even though that’s the treatment, he’s coming to see me forty years later complaining about the same symptoms.

I call this approach dysfunctional medicine, which is basically doing things that actually impair the normal function of your body. The patient went through all these medications, procedures, and surgery—almost died—and wasn’t left with any solutions. Still, on top of that, they had him taking a lot of other medications for depression and anxiety, blood pressure, gout, etc., but none of that helped either.

If it made him feel good, then it might be worth it. But I call it dysfunctional medicine because even after all of that he was still feeling terrible, actually even worse, and there’s something wrong with that picture.

This is where you actually get to the underlying root causes, and then you can provide long term permanent solutions.

Even though the patient came in with no colon, numerous symptoms, and was feeling miserable, four weeks later:

So he’s doing phenomenally well. What really inspired me to even talk about this is the fact that he went to his primary doctor this week, and he thought he’d be really proud of him. He lost twenty-two pounds, he’s eating really healthy and taking supplements, he’s off his blood pressure and gout medication, and he cut down some of his other medications from another doctor as well.

Bu this doctor wasn’t very happy about. He actually seemed kind of ticked off that he was able to get off his medications, as if he thought, “Well, I guess you have no use for me.”

When you go to a medical doctor, their job is to manage medications. And that’s fine—there is certainly a need for that if you’re the type of person who wants to go that route and take medications for this condition or that condition. Let’s say you have high blood pressure or high cholesterol, and you just want to take the medication and eat what you want and not exercise and you don’t really care. Well, then, that’s fine.

However, if you’re the person that would rather choose health and get to the underlying root cause, and then be provided long term permanent solutions, which is the functional medicine approach—that root cause approach—that we practice, then that’s really choosing health. Because you want to actually get better.

So let’s look at some of the causes for this patient’s ulcerative colitis. The first step is a complete evaluation and whole body health analysis.

The three categories of what cause autoimmune or other chronic health conditions, including thyroid issues like Hashimoto’s disease, nodules, etc. are:

In the chemical stress area, we look at four separate areas:

The patient was low on vitamin D, some B vitamins, B12—he actually had B12 anemia—and omega 3s. His DHEA was really low, so he had adrenal fatigue, and his cortisol was low as well. This alone could cause exhaustion, insomnia, depression, and anxiety.

Taking too many medications, in his case six different ones for depression, bi-polar, anxiety, etc., can have a very toxic reaction. High levels of uric acid and triglycerides, too, can cause inflammation of the joints.

Yeast overgrowth and bacterial overgrowth were both going on. One of the primary causes of colitis is infection, so he had this chronic ongoing infection—probably for forty years—of yeast and bacteria causing a leaky gut, which can in turn lead to increased food sensitivities.

He had a gluten sensitivity as well as sensitivity to other foods. Just gluten in itself can cause all of the symptoms he was having, including his digestive symptoms and his anxiety, depression, and bipolar symptoms.

That’s how he was able to drop his blood pressure by over forty points in two weeks and lose twenty-two pounds in a month, even though he wasn’t able to lose weight before. His digestive symptoms cleared up, he was able to sleep through the night, and he was feeling really great. It was really rough going through it, but by the fourth week, he was feeling like a new person. And that’s how you’re able to do it.

The diet we put him on is the FreeDiet™, and you can grab a complimentary copy of the FreeDiet™-Phase 1 right here. The FreeDiet is another important component of the treatment plan, because it’s not only free of gluten, but also grains, corn, sugar, yeast, eggs, dairy, soy, legumes, and GMO’s. These are the ten major categories of foods most commonly responsible for inflammation, chronic digestive issues, and fatigue. So we allow the gut to heal by removing these foods.

Besides the FreeDiet™, we replenished a lot of his nutritional deficiencies with our Natural Medicine Formulas, probiotics, and vitamins and minerals. So that, along with manual treatment for different joint issues he was having, is how we were able to get him doing so well in just four weeks’ time.

If you have any comments, feel free to leave them below, and feel free to subscribe to my YouTube channel if you want early notification of new videos.

Just remember, whatever issue you have going on, whatever chronic health problem, your body has an incredible ability to heal. If you just look into finding those underlying root causes, I believe most every health problem has a solution. Once you find that underlying cause, you can find the solution.

Thanks for joining me today, and I look forward to seeing you next time! Take care.