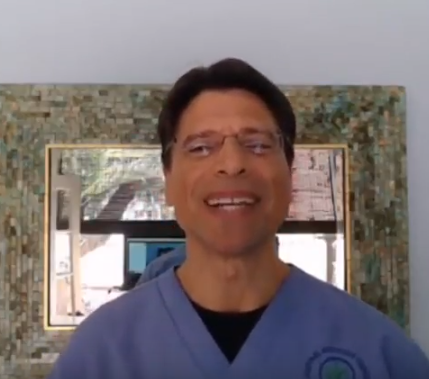 My name is Dr. Tom Rofrano from the Natural Medicine Clinic in Palm Beach Gardens, Florida. And today I’m going to talk to you about thyroid Hashimoto’s- the worst case I ever saw. You see, I’ve been practicing for over 30 years now with chiropractic, functional medicine, and nutrition. And a lot of patients come in with thyroid issues, autoimmune, nodules- it’s one of the more common things that patients come in with. It may have something to do with  the fact I also had Hashimoto’s over ten years ago and after a lot of investigation, I was able to figure out what was causing it and actually heal myself.

A Multitude of Symptoms

So in the process, I just learned how to apply that with other patients. This one particular patient came in over ten years ago and she had the craziest symptoms. She had stinging- all these stinging and numbing, shooting pain like pin prick pains all over her body that wake her up at night, fatigue, brain fog, digestive issues. She had constipation. and I mean, severe constipation, thinning hair, dry skin, aches and pains, and she had high cholesterol. Her doctors wanted to put her on statin drugs – and actually low thyroid can cause all of these things including high cholesterol, insomnia, anxiety. With all this going on, she wasn’t sleeping. She couldn’t even think straight.

So she have been to a number of different doctors. They finally diagnosed her with peripheral neuropathy. They had no idea what caused it, and prescribed her with this powerful nerve drug. She took it once and ended up in the emergency room. So she came in as a new patient, I did a complete initial evaluation and  found out she had Hashimoto’s thyroid autoimmune disease.

Her thyroglobulin antibodies were over 5000, normal is below 100. Her TPO antibodies were almost 300, and, depending on the lab, normal is less than 50. So I sent her to an endocrinologist at the time and she prescribed Synthroid and said her thyroid will continue to get worse. She said that her thyroid will continue to deteriorate, maybe go high and maybe lower, that she will develop nodules, goiter maybe. And didn’t paint a very rosy picture. She was really frustrated and feeling miserable.

Right After My Diagnosis

So around this time, I also coincidentally had found out I had a Hashimoto’s.  I was doing a lot of research and investigating and figuring out what caused it. I couldn’t take for an answer what the endocrinologist told me that there’s nothing you can do about it except  take Synthroid the rest of your life. So in the process, I realized that chronic health conditions, whether you have an autoimmune condition, whether it’s Hashimoto’s- which is autoimmune thyroid- really any chronic health condition is caused by three main things: physical, mental, and chemical stress.

As far as physical stress goes, she did have a lot of neck issues that we were helping her with. As far as mental stress, after testing, she did have adrenal dysfunction/adrenal fatigue. So that was part of it. Chemical stress- after doing lab work, figuring out what was going on, it basically breaks down into four main parts. Under chemical stress, first is deficiencies.

With autoimmune conditions, there’s an underlying theme, whether you have rheumatoid arthritis, MS, diabetes type 1, lupus,  Hashimoto’s, your body is attacking itself. So whatever body part that is, thyroid, joints, nerves. So why is your body attacking itself? I don’t take it that it’s just a deficiency of these other drugs they want to just keep giving you and not giving you an answer. So it’s finding out  what is it that the body is fighting off.  If you’re deficient in certain things then your body isn’t functioning properly.

Like for instance, this patient was deficient in vitamin D, magnesium, B12, iron and iodine. If you’re deficient in iodine, then that affects your thyroid. You need iodine to make thyroid hormone and if you’re deficient in iodine that can cause nodules and goiter. And you shouldn’t just go and take iodine if you haven’t tested for it because it can also be too high. That can cause more harm than good but in her case, she was deficient in that- again, along with Vitamin D, iron, B12 and magnesium. So all these things are very important in getting your body to function at a normal level- your immune system because that’s really what’s going on with autoimmune. Your immune system’s gone haywire. So that’s number, one deficiencies.

She was high in lead and mercury and both of those are actually nerve toxins. They affect your brain, nervous system, immune system, among many other things. The peripheral neuropathy that she was having was affected by this in addition to the deficiencies.

Pathogens are extremely important and from my experience, almost always involved with autoimmune conditions. She had really high levels of yeast. She had multiple parasites. And she had bacterial overgrowth. Now all of this can cause leaky gut, which then increases the amount of food reactions. Which leads to the fourth thing, under chemical stress.

Food sensitivities, food reactions, food allergies and in her case, she was sensitive to gluten, yeast, sugar, legumes, dairy, eggs and some others. Now if you’re eating foods you’re reacting to, gluten for instance, and that’s an issue, then your body’s fighting this off and attacking it. Your immune system sees it as a foreign invader and then in the case of Hashimoto’s, can actually start attacking the thyroid while it’s attacking its gluten molecules. So I almost always find that gluten and yeast are involved with Hashimoto’s. After testing that is what we with her and it was very similar with my case.

So what I did for my for myself and many other patients since is that I realized  gluten-free diets just didn’t work because you’re eating all these other gluten-free products with rice, rice flour, corn, corn flour and all these other. Eating gluten-free donuts and gluten-free cakes and cookies – it just doesn’t work. So what I came up with is a diet that did work.

It is a diet that’s not only free of gluten but free of gluten grains, sugar, yeast, dairy, eggs, soy, legumes, nightshades and processed foods.  And for phase one because you’re eliminating these foods that are most responsible for a digestive and other chronic health issues, this allows your body to heal, calm the inflammation and actually get better. And it’s called the FreeDiet™- that’s what I followed, and what I put this patient on.

So after doing all this testing and putting her through our treatment plan, which has since evolved- I call our Functional and Free program because it really is designed to discover your underlying root causes and provide long term permanent solutions. Over time of following this, it was an involved process because in addition to the food reactions, we had deficiencies,  pathogens- yeast, multiple parasites, bacterial overgrowth- and heavy metals. Over time, she started to get better. and her symptoms were subsiding. I mean at one point, she had constipation so badly, she did not have a bowel movement for two weeks- like none, zero for two weeks. Like where is this stuff going?

And then, I was doing different things with her it was helping a lot but her endocrinologist refused to give her anything but Synthroid. So I said ask her again to get her on a  thyroid which is natural  natural T4 with T3 because a lot of people can’t convert  and that can cause a lot of symptoms like constipation, etc. So she finally did and that was it. As far as the constipation goes, that cleared up. She goes every day which is so important.

If you need medication, then get on the right one. Speaking of deficiencies, in her case, the T3 was still really low. So after all of this began to die, the supplements, you know, gone to our seven stuff process. You know, the antibody started to come down. In about 2 years they came down almost 1000 points to 4400.

And then we started putting everything together and in the next two years’ time  after doing all of this, it went from 4400 to 114. You know, from over 4000 to around 100- so normal levels in two years. It was amazing to see that transformation and she was feeling great. Her symptoms had cleared up. All her labs along with her symptoms- stinging, all that stuff, aches and pains. The cholesterol was- went down to normal. So all of our issues had cleared up and it’s just so encouraging.

Even a very severe case like this or whatever is going on with you, in most cases, you can get better. It’s just a matter of really committing, getting in there and finding out, what’s causing this? Getting to the root cause and then being provided with some long-term, permanent solutions so that you can get better.

So I wanted to share that story with you today and thanks so much for joining me. If you would like a copy of the Free Diet, just click on the link. If you know anyone that would benefit from this, feel free to share it and again, I appreciate you spending time with me today, and we will see you next time.